“When your old-ass parent is like, ‘I don’t know how to send an iMessage,’ and you’re just like, ‘Give me the fucking phone and let me handle it.’ Sadly, that’s what we have to do with our government; our parents don’t know how to use a fucking democracy, so we have to.” – David Hogg, Survivor of Marjory Stoneman Douglas schooting

Regarding delight: ask anyone who knows me and they’ll tell you that I love analogies. (Maybe you will understand me better if I write, “I ♥ analogies.” #celebrateilliteracy #icantreedorrite.) I love them because they somehow make communication crystal clear.

Regarding time: because you used an analogy, I do not have to ask clarifying questions to get at the heart of what you want to say. In other words, you have made my duty simpler. So, again, thank you for saving me time. 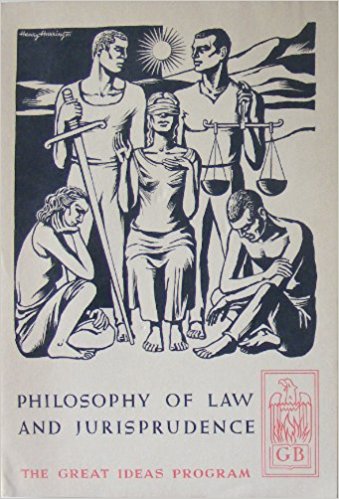 The preface to Philosophy of Law and Jurisprudence includes two true accounts of people stranded at sea after shipwrecks. Inevitably decisions must be made as to who should get to live at least a little bit longer. And, yes, cannibalism is sometimes the best option.

Against this backdrop, the authors present Western Civilization’s history of thought about the “law”. The book isn’t very long at all. Though, I will admit that to the likes of David Hogg and friends, compared to 140 characters, the work may seem unending. To old-ass parents, however, the ability to coherently, if not comprehensively, paint the broad-strokes of the past 2500 years’ discussion of Western thought as related to the law seems a pretty incomparable feat.

Beginning with Aeschylus, we are presented with the law as found in the infamous Greek tragedies as captured in fictions surrounding the Trojan War. In short, revenge is shown for what it is–unending. The only solution to the eternal problem is given in the institution of the court, the law.

Plato, in turn, takes the law and states that it has the purpose of promoting virtue, through persuasion and coercion.

Aristotle answers the new question which arises from Plato’s idea, which is, “What is this thing that men should be persuaded and coerced to be?” In short, after delineating natural law (killing is bad) from man-made law (speeding is bad), Aristotle offers that the man-made law must be for the common good and be properly made.

The Old and New Testaments are treated next, under the question, “Why is there any need for divine law?”

We next return to Aristotle and Plutarch, to include Solon, and see outlined the three functions of the law. The law must be made, enforced, and applied. Here we see the makings of our own three branches of government, the legislative, executive, and judicial.

Aquinas seems to be one of the first to notice that up until his time none of his predecessors really even didactically defined the term in question, that being, the law.

Finally, we read Aquinas’ definition, being, “[law] is nothing other than an ordinance of reason for the common good, made by him who has care of the community, and promulgated.”

Aquinas is also the author from which we find the complicated but enlightening idea that an unjust law is an impossibility, instead it is merely a counterfeit law.

Hobbes is the man responsible for creating the notion that the commonwealth, the group, should be thought of as a new being–which he calls the Leviathan. In his system, there are essentially three commands/points. First, right to life is the only inalienable right. Second, to achieve life, one must give up all rights and liberties (with the assumption that all others follow suit) and third, men must perform the covenants that they make. The tricky part of Hobbes is that there is no law without the Leviathan. And the Leviathan cannot be against itself. Put another way, for Hobbes it is irrelevant that I think a law unreasonable.

Shakespeare’s Merchant of Venice receives the next chapter’s attention because of the covenant involving one character’s willingness to underwrite his debt with “a pound of flesh.” In other words, Shakespeare brings out that mindless obedience to covenants may not be best.

Montesquieu takes up the law with the phrase, “the Spirit of Laws,” as he promotes the notion Shakespeare observed, that is that there does not seem to be one hard and fast law. Specifically he advocates that the particular and distinct circumstances–especially the climate wherein the particular culture (or Leviathan if you will) exists–must be taken into account as the law is created, enforced, and applied.

Rousseau adds to the discussion by providing the sound reasoning that the law sets men free. Rousseau is also one of the first to argue that the law, as it sets us free, is primarily concerned with protection of property as property is the freedom most easily taken away.

Kant, while approaching the law from the perspective opposite Montesquieu (science), picks up the property notion and explains that to even say that we have a right to property requires a second person. And therein he defends the importance of property ownership as a measure of the law.

Next we view the American Constitution through the eyes of its inadequate predecessor, the Articles of Confederation. This will always be a worthy exercise.

Hegel then exposes the significance of understanding there is most assuredly a difference between the history of laws and the philosophy of law. He wrote, “A particular law may be shown to be wholly grounded in and consistent with the circumstances and existing legally established institutions, and yet it may be wrong and irrational in its essential character.” He is also responsible for spreading the notion that the philosophical task (in this case, answering either, “What is the law?” or “What is right?”) has not begun until the ideas are actualized.

Finally, the book ends with discussion of Dostoevsky’s The Brothers Karamazov. This is due to the final courtroom melodrama which is about as morally difficult as anything yet written and demonstrates that the question, “What is the law?” has not yet been conclusively answered.

Despite our current predicament, this little history lesson may be enough to demonstrate that the American system was very well thought out–not by grieving, angry teenagers but by parents who could tell the difference between hammer and house.

But you already knew that, Mr. Hogg, didn’t you?